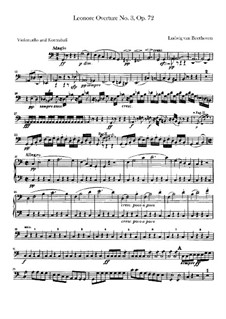 There's a mix of performances here but I haven't included anything too 'historic' all have good or better sound. Some of the recordings are live and although a couple may seem more recognisable most aren't very obvious. These are not my 8 favourite recordings of Leonore 3 but there is one of my personal favourites in this collection.

I thought I'd go for some different styles.

Beware, many of these recordings aren't from dedicated symphony cycles Leonore 3 is a popular makeweight on orchestral releases! However, if you know the identity of these recordings please don't reveal conductors or orchestras but feel free to rank them in order from favourite to least favourite and maybe add some details of what you thought of the recording, performance, etc.

A quick sentence would suffice or more for those who want to write more. In a few weeks or possibly less depending on whether anyone's interested I'll let you know what the winning recording was and then reveal all the recordings used. In the interests of discovery try not to cheat.

You might find a recording by a performer you hadn't previously heard or rated. I actually tried to cheat using identifying software but out of the 8 recordings only one was successfully identified and that was the 3rd time round after 2 wrong answers. Here's the Dropbox link, below. Okay, here's my stab at it.

All of them were very good. There were none that I actively disliked. Thanks hustlefan. Great review. An interesting start. Be fun to see what others think too. I'll definitely take part as I love these kinds of things. I might make a new one myself soon Alright lets see A: Nice clarity in strings at allegro, but too metronomic for my taste. Dynamics played very straight, the swells around pages in the score are an exception that also just sounds a bit out of place as well.

Repeated passages and sequences lack variety in the way they are performed, quickly loses direction.

Not much attempt to connect dynamic shape and tempo to the actual structural phrasing and the underlying architecture of the composition itself. Overall it is very well articulated and the orchestra is well-balanced, but the music just seems to have no sense of direction or purpose.

The conductor plays it safe with a very non-intrusive and literal reading, but it falls flat. They don't blend well in tutti passages. At soft dynamics, however, they sound fantastic. The development section is good and has a sense of direction, but it was sandwiched between two soggy slices of exposition and recap that seemed to miss the mark The fortes in the intro are nice and weighty as well.

Also By This Composer

The quiet start of the allegro is very characterful and has a good sense of momentum, but the development section tends toward the predictable and even the monotonous in more repetitive passages. I reckon the conductor needs to lead the interpretation here more! Towards the recap, when the flute and bassoon have their little duet, I just thought that was a memorable moment, lighthearted and fun. All the varied 'characters' and 'emotions' that can be drawn from the work are there some of the time, and other times I don't think they are drawn out of the music enough.

The opening introduction is the best thing about this performance; the string vibrato is very expressive and there are a variety of types in there rather than a simple continuous tone common to other recordings. I like that! For most of the piece, however, the transitions were just too choppy. I suspect that might be due to a very rigidly metronomic reading. The music is really well articulated and dynamics fairly often are what makes the music really come alive, but as I mentioned before, there are many instances where it sounds like dynamics are just used for a cheap thrill.


Almost everything after the very good intro sounds a bit glossed over with a very 'uniform' overall timbre. The woodwinds sound particularly cold and lifeless. The tutti fortissimos in the intro also sound terrific. This performance has a similar kind of energy to D, I think, particularly with the dynamics; sometimes they are used well, but sometimes it sounds like that cheap thrill we got earlier. The tempo modification at the start of the second subject of the exposition and brought back in the recap is lovely, but I would have enjoyed some more of this to really draw out some more expression in the music.


Page 48 in the score is also really well handled in terms of tempo. It struggles to find footing for the first couple of minutes, but when it does, the intro ends up sounding a little too robotic, lifeless and basically just going through the motions. At the allegro, the first crescendo into the tutti is quite nice, and the brass really blazes like a harsh ray of sunlight.

Mostly this performance leaves me a bit confused more than anything. The repetitive phrases and sequences sound either directionless or veers into a weird direction before quickly teleporting back to where the music needs to go at the start of the next phrase. A tad confusing.

Following this passage, the clarinet and bassoon sing Florestan's dungeon aria, "In The Spingtime of Youth,"with string accompaniment. Immediately mysterious preludings are heard in the strings, accompanied by lighter work in the flutes and first violins and bits from the Florestan theme given out by the basses. A short climax is followed by an outburst of the full orchestra, leading to the Allegro.

It opens pianissimo, with the first theme announced by the first violins and cellos in octaves. Its development leads to a fortissimo in which the theme is elaborated at considerable length. The second theme is introduced in the horns, thence passing to the first violins and flute. As the development draws to a close a climax is reached, after which ensues a dramatic episode of great power, in which the trumpet calls each time announce the approaching deliverance, followed by a fervid and impressive song of thanksgiving.

The third section of the overture opens piano, with a flute solo. A crescendo follows, after which the theme is repeated fortissimo and developed most elaborately. The second theme now reappears, followed by development from the first theme, leading to the Coda, and closing the overture with an overwhelming outburst of gladness and triumph. Leonora Overtutre No. As it is entirely unknown in the modern concert-room its analysis becomes unnecessary. After its completion Beethoven had doubts of its effectiveness, and accordingly tested it with a small orchestra.

It was much too light for the opera, and in consequence it was laid aside and was not played in public during the composer's lifetime, its first performance having taken place in Vienna in , and Beethoven died in The composer gave it the title of "Characteristic Overture in C. Fidelio Overture. It was Beethoven's original intention to revise the Overture No. The overture opens with a short unison Allegro in the string and wind instruments, followed by an Adagio in the horns and clarinet. 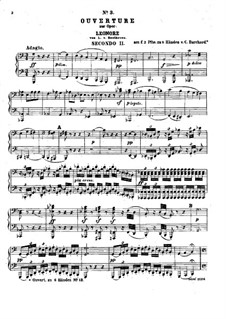 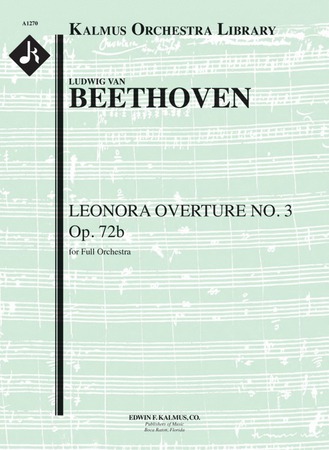 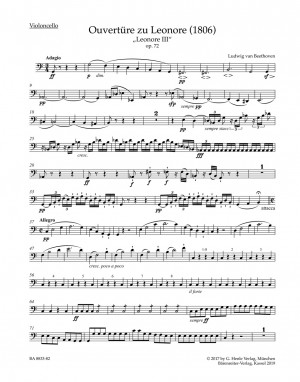 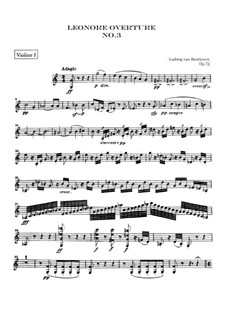 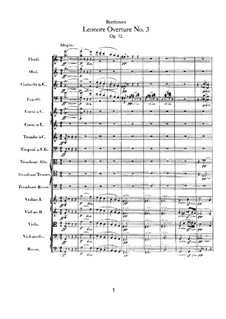